The final Industry Summit and Awards Gala Dinner presented by the Oil & Gas Awards for 2015 took place Thursday at The Westin Dallas Park Central. This being the local event for VZ Environmental we had 15 employees and family members in attendance. The event was a unanimous success among our crew.

The Industry Summit took place during the day and was packed with a wide variety of informative panel discussions. The topic of the first panel was Leadership. We were honored and proud to have Carol Van Zandt Jones, VZ Environmental President & CEO, as one of the panelists. She and Bill Ward, Senior VP of Superior Pipeline shared their thoughts and strategies on:

The morning was kicked off by Keynote speaker Christopher Guith, SVP Policy, US Chamber of Commerce – Institute for 21st Century Energy.

When the Summit resumed after lunch we were treated to a very informative Keynote by Bruce Bullock, Director of the Maguire Energy Institute at Southern Methodist University. His topic was Cheap Oil – Who Wins? Who Loses? The Broader Political and Economic Implications. He delivered insightful oil pricing trend and forecasting information in an easy-to-understand way and shared his thoughts on the United States’ great opportunity in the World Oil Market. As well, his thoughts on when the price of oil will rebound to a more profitable and stable level. 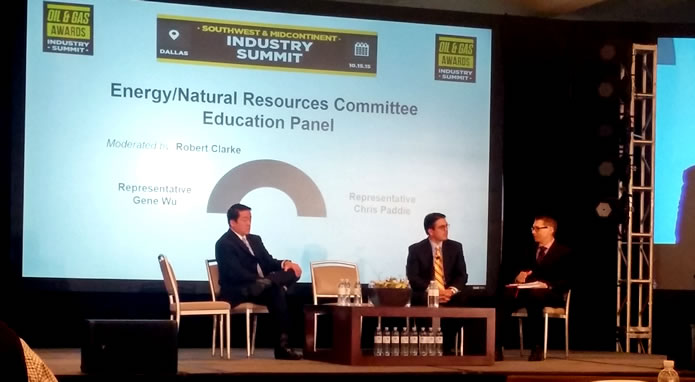 How could the Oil & Gas Awards top that with more afternoon sessions to come?

Two different political ideologies that shared common ground and differing opinions on House Bill 40 and recent seismic activity in Texas. Very informative and much respect to them for sharing with the Oil and Gas industry executives in attendance. 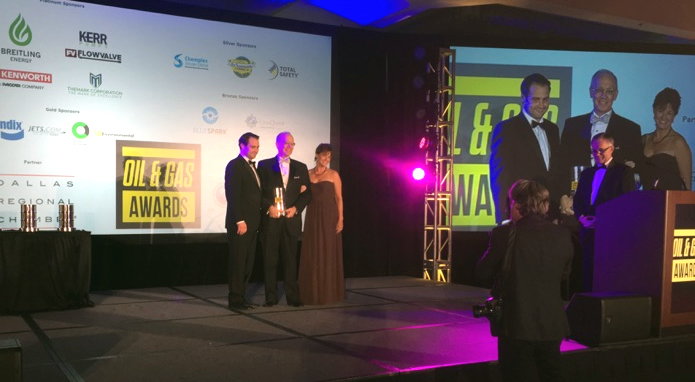 Just as with previous events we’ve attended by the Oil & Gas Awards the evenings celebration was first-class. A great networking opportunity for the packed house prior to the dinner and then the awards.

As a previous recipient of awards VZ Environmental no longer submits our products and services for entry into any of the award categories. We now participate as a sponsor for one of the very awards we had won. After all, it is the crux of who we are as a company, that is, Excellence in Environmental Stewardship.

The VZ Environmental Award for Excellence in Environmental Stewardship spotlights a company judged to be an industry leader in environmental stewardship. Congratulations to Houston Advanced Research Center (HARC) they were judged the best among many entrants that the Oil & Gas Awards received for the Southwest and Midcontinent region.

HARC’s focus on energy is to accelerate the adoption of clean energy technologies and policies; finding solutions for environmentally friendly oil and gas development.

Accepting the award for his team of researchers was Richard Haut, PhD, Program Director, Energy Production.

Congratulations to the following companies for their success in the 2015 Southwest & Midcontinent Oil & Gas Awards!

We rent Emergency Shower / Eyewash Trailers for oilfield and construction sites. Full-body drench and eye-flush in one unit.

CONNECT WITH AN OFFICE LOCATION

Images From The Oil Fields